Many will be aware of the work of Welsh historian Terry Breverton, particularly his recent forays into the world of the Tudors. Amongst his recent work has been biographies of Henry VII (2016) and Jasper Tudor (2014) which sandwiched the interesting Tudor Kitchen; What the Tudors Ate & Drank (2015). On the tails of his work on two previous Tudors come this interesting biography on arguably the most fascinating member of this Welsh dynasty that captured the English crown – Owen Tudor.

The book is subtitled Founding Father of the Tudor Dynasty and this aptly summarises the life and times of Owen Tudor. He was born around 1400 to a Welsh family torn apart by his uncle Owain Glyndwr’s Welsh Wars of Independence, and migrated to England at a young age to find his fortune. And find a fortune he did, in the form of a queen of England, no less. Owen met, fell in love, and married Katherine de Valois, widow of Henry V and mother of the incumbent king, Henry VI.

His life thereafter is one of the most remarkable tales in English or Welsh history. Through Breverton’s easy to follow, if often blunt, narrative, we learn how Owen survived persecution and imprisonment after his royal wife’s premature death, helping raise two sons who would become earls of the realm as half-brothers to Henry VI, and standing behind one of those sons, Jasper, as the Wars of the Roses erupted in the late 1450s. Owen’s life came to a brutal end during the aftermath of the battle of Mortimer’s Cross between his son’s Lancastrian army and a Yorkist force led by the future king Edward III, a skirmish in which the subject of this biography fought despite being around 60 years old. Owen was captured and led to Hereford where he was mercilessly beheaded on the market square. 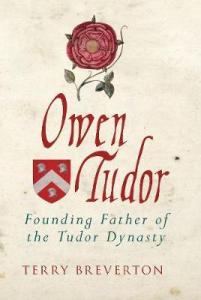 Owen Tudor, Founding Father of the Tudor Dynasty, also covers the ancestry of Owen, along with that of the woman with whom he would become forever associated, Katherine of Valois. The book is particularly interesting in that it is often written from a Welsh perspective by a Welsh author, offering insight into the life and motivations of the subject often lacking in English accounts through the ages, ignorant of the importance of Welsh prophecies and legends in helping propel the Tudors towards the throne of these islands. A chapter on Owen’s legacy makes for interesting reading, and naturally leads onto Breverton’s other books on Jasper and Henry Tudor, whilst an appendix uncovering Owen’s appearances in literature discusses his place in numerous fiction works, from a 1600 play called Owen Tudor through to the recent 2016 release by author Tony Riches. Its intriguing to read how Owen has been immortalised having just read his actual life story.

Breverton’s book may at times deviate from its subject, as to be expected from a study of a life of which we don’t know a great deal, but that’s not to say this work doesn’t have worth. Owen Tudor has long been an enigma of the medieval period, a swashbuckling hero almost more suited to romantic fiction than serious academic study. Indeed, the author notes in his introduction that this wasn’t an easy book to research. That being said, Owen Tudor by Terry Breverton is a long-overdue work dedicated to one of the more captivating figures of the Tudor dynasty. It should be remembered that every English monarch post-Henry VII was descended from Owen, not to mention various foreign rulers including five kings of France, several German emperors, kings of Spain, Norway, Greece, Italy, Denmark, Bulgaria and Belgium and even Marie Antoinette. An accomplished effort to conclude Breverton’s Tudor biographical trilogy.

Historian Terry Breverton is a former businessman, consultant and academic and is now a full-time writer, having received the Welsh Books Council’s Book of the Month Award five times. He is an expert in Welsh culture and history and has presented documentaries on the Discovery Channel, the History Channel etc. Terry has worked in over 20 countries and has written over 40 well-received books including Richard III: The King in the Carpark; Breverton’s First World War Curiosities; Owain Glyndŵr: The Story of the Last Prince of Wales; Wales: The Biography; Wales: A Historical Companion; Immortal Words; Immortal Last Words; Breverton’s Nautical Curiosities: A Book of the Sea; Breverton’s Phantasmagoria; Breverton’s Encyclopaedia of Inventions; Black Bart Roberts; The Journal of Penrose, Seaman and Breverton’s Complete Herbal.