Of all the monarchs in English history, not many commands more interest than Richard III, and indeed very few have more biographies written about them than this last Plantagenet king of England. There is a certain irony in the fact that whilst scores complain this particular monarch is overlooked or maligned, it does appear to this reviewer that more books exist on his life and times, many revisionist in nature, than all other kings and queens combined, Henry VIII and his flock of wives excepted. Certainly, since the astonishing rediscovery of his remains in 2012, there have been several books on the subject of Richard III with each passing year, a fact which may lead one to wonder why there is a need for yet another biography of a king who barely ruled these lands for two years.

Matthew Lewis himself opens his work ‘Richard III; Loyalty Binds Me’ in acknowledgement of his, noting that king ‘has perhaps been the cause of more spilt ink’ than any other domestic figure over the last five hundred years. He justifies his own attempt to capture the enigma that is Richard by intending to ‘place an authentic man in the complex context of his times’, to try and produce a biography that looks at the entirety of the king’s life and not just the final years, and to do so by providing ‘a measured and balanced opinion’.

Whether the authors intend to or not, books on Richard III can often be so replete with bias and agenda, whether for-Richard or anti-Richard, that they become unreadable to the casual reader with little interest in confirming to prejudices they may not possess. As such, the real Richard, the Richard who lived and breathed, is often regrettably concealed by the Saint Richard or Tyrant Richard caricatures of his modern supporters and critics.

Despite his humble assertion that as a staunch Ricardian this work is naturally sympathetic to his subject, and will perhaps be considered revisionist, Lewis does not fall into the trap of sanctifying Richard III as many of his ilk have done before him. For him, Richard was ‘neither victim nor evil mastermind’. 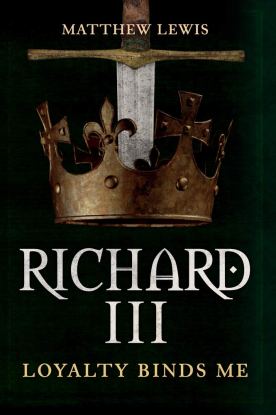 The eminent historian GM Trevelyan once wrote “Since history is our interpretation of human affairs in the past, it could not exist without bias. But with a wrong bias, it can be gravely distorted”. This book does not, in my opinion as someone who has been critical of Richard’s actions, possess a wrong bias, and the result is an exceptionally readable, deeply engrossing, and valuable resource for the shelf of any medieval enthusiast or curious novice.

Written chronologically from cradle to the grave, Lewis’s book covers all aspects of Richard’s life, and often seeks to place the boy, duke, protector and then king into the context of his time and surroundings. Despite the wealth of books on the subject, such an extensive project has rarely been produced, preferring to focus only on parts of Richard’s life such as his brief reign. Yet to understand the king, you must know the background. Lewis does not shy away from the controversial aspects of his subject’s 32 years on this earth, and whilst he does, at his own admission, often assume a sympathetic reading of events, the author always provides valid reasons for his deductions whilst acknowledging the counter-arguments that may often be the default positions.

This final point is important – it ensures we do not have a partisan propagandist preaching at the reader with every paragraph, a refreshing change when it comes to this particular king. The reviewer does not always concur with Lewis’s conclusions, but does see validity in the arguments presented.

Despite claims to the contrary, nobody can say, with absolute certainty, that Richard III was guilty or innocent of many crimes he has allegedly committed, and if they do, they do a disservice to the study of history. Lewis, to his credit in a difficult subject which often demands an uncompromising stance is assumed, often presents his case like a courtroom lawyer and leaves it to the jury, in this case the reader, to make their judgement.

Where required, the author goes into great detail to examine key events in the life of Richard III, and in particular the thorough investigation into the demise of Henry VI and the likely culprits was impressive, with extensive use of primary sources and how each must be judged on its own merit and motivation before arriving at a conclusion. This section has educational value in how to assess and use various sources to reach a conclusion, and as he shows you his process, it enables to reader to agree or disagree with his findings.

In short, Lewis’s ‘Richard III’ book succeeds where many before him have failed – he doesn’t seek to hoodwink the reader, or foist upon them a disingenuous depiction of Richard that a cursory glance at the sources renders nonsense. He does advance a sympathetic interpretation of those sources, but not to the extent it becomes overly generous, whilst working hard to expose the failures of previous historians who have sought to create a monster from a man. The result is a book that at no point in time did I slam down and walk away from, a rarity when one deals with the delicate subject of Richard III.

I fall short of calling this book the definitive Richard III biography, as I feel such a lofty title is simply not possible about such a complex, controversial and divisive figure, but regardless Lewis’s effort is a highly recommended addition to one’s library that is far more worthy than many similar studies which have preceded it. ‘The study of history is the asking of questions’ writes Lewis, and in this fine book that will likely stand the test of time, he has asked many fair questions of Richard’s reputation that must no longer be ignored. This is the story of Richard the man, not Richard the myth.

One thought on “Book Review – Richard III: Loyalty Binds Me by Matthew Lewis”